While highly modernized Seto ceramic industry enables mass production, some ceramicists uphold their traditional techniques to create their pieces of works. Isomura Yasuo is one of them. He paints classical design motifs and patterns to preserve styles of hand-painted sometsuke (blue-and-white⁄underglaze blue) tradition.
Ayatakado visits Isomura Yasuo's studio to ask him about Seto sometsuke tradition and why he places great importance on traditional Seto sometsuke. 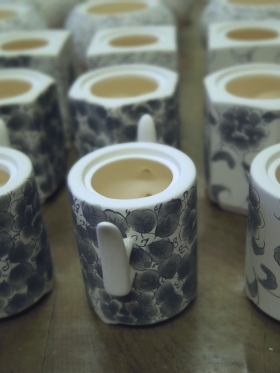 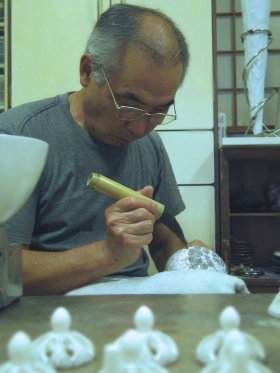 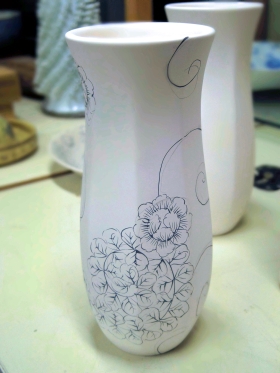 - Your family runs a ceramic manufacturing company and your brother took over the business.

My family has run a ceramic manufacturing company for four generations in Seto. My father passed away when I was in my third year of university. My brother, who is two years older than I am, found it difficult to take over the family business alone because he had just graduated from university. I decided to leave the university and started working with him. It was 43 years ago when I was 20 years old. I had worked with my brother to manage the business until my nephew, my brother's son, took over it. I stepped down at age 60. Until then, I worked at the company while I created my own works at this studio.

- May I ask what you did at the company?

I was a director. The company manufactured porcelain tableware. I was in charge of product planning such as design.

- Did you work as an independent ceramicist outside your working hours of your company?

Yes I did. Because I always think that this kind of traditional techniques will be lost forever unless someone carries on it. As they are handcrafted, however, I cannot make pieces of work in large quantity. Ceramic industry has shifted to mass production and now we have reached a point where we find it difficult to break away from that.

- You have sometsuke drawing design books. Could you tell me about them?

Usually, drawing design books are handed down through generations of sometsuke porcelain manufacturing potter families. underdrawing designs for sometsuke paintings are illustrated in those books. In the old days of Seto, each family had its own unique and secret drawing design books. You can see some of them exhibited in the museums now. Those exhibited books are from the families who closed their businesses already. Those potter families used to possess their own pieces of land in the mountains where they mined mineral ore to extract natural gosu pigment (mainly cobalt with manganese) which turned in their own blue. Each family had unique and distinguishing blue that could identify who was the maker. We use chemically synthesised gosu nowadays because natural gosu has become rare.

- Who did you take over these design books from?

They are not from my family. I took over them from my acquaintance. He entrusted me with them because number of sometsuke painters in Seto is getting fewer nowadays. I hope I will be able to hand them over to someone who wants to be a sometsuke painter specialized in classic patterns some day. These drawing design books date back to the late Edo period (1603-1868) and the Meiji period (1868-1912). 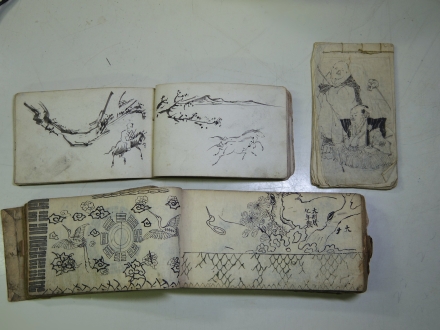 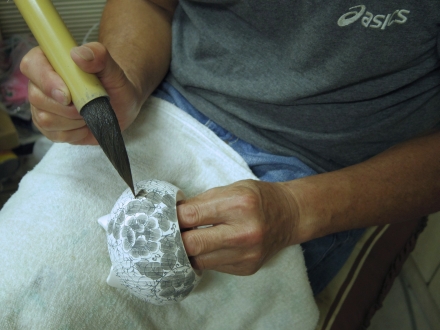 - Could you tell me who originally owned these books?

He was an owner of a kiln that continued for generations but he closed it. These design books were handed down in his family. I think he trusted in my creation when he handed these books over to me because there were not so many sometsuke painters who painted designs of patterns and motifs in fine detail in Seto. That was a heavy burden for me though. I have taken a responsibility for the legacy.

- I saw Seto sometsuke pieces from the Meiji period, which are exhibited in the museum in Seto city. Sometsuke painters in those days painted patterns in elaborately fine detail on big porcelain pieces.

Almost all of the works were once exported to Europe or the United States and then returned to Seto in recent years to be exhibited in the museum. They are all hand-painted. A company called Noritake exported porcelain made in Seto. Excellent Seto sometsuke pieces were not distributed to the Japanese market but exported to foreign countries in those days. That's why people regard the products manufactured in Seto as cheap stuff. Ceramics industry in Seto focused on mass-production and cost efficiency. But Seto originally produced excellent works exhibited in international expositions overseas in those days and awarded gold and silver prizes. That means craftspeople in Seto had highly evaluated skills and techniques. If such good works had been distributed to the Japanese market, the reputation of Seto would have been much higher. We have good clays in Seto. Their plasticity enables you to make anything.

Not 100% but I basically use clays from Seto. Seto clays have a tinge of black so I blend a type of clay to make it whiter. Blending ratio changes the colour of porcelain. I have a particular blending ratio to turn the gosu pigment to the blue which is peculiar to my works. I use the white clay for slip casting. Slip casting technique has a long history in Seto. Craftspeople in Seto porcelain production applied this technique in the Meiji period, which was 120 to 130 years ago. However, this blended white clay is less plastic so I cannot throw pots with it. When I throw pots, I have to change the blending ratio, which makes clay a little darker. 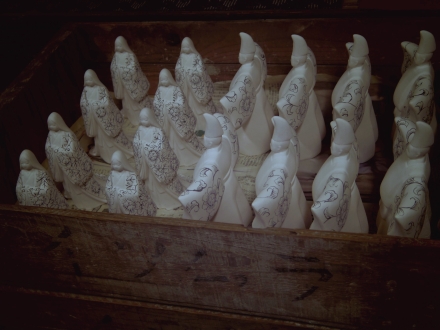 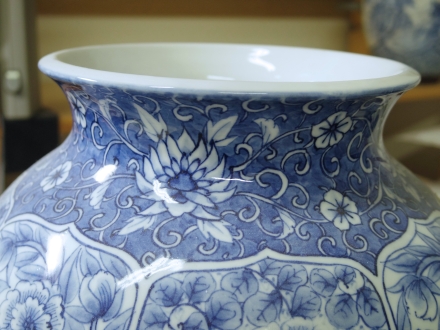 - According to your biography, you have been to Europe.

I visited some places which is famous for their ceramics production. I visited messes in Germany and I went to Sevres in France. It was in the 80s when I was young. I went to China, Taiwan and Korea to see potteries. In Korea, I visited a craftsperson who created Korean celadon several times. I was interested in Korean celadon at that time. Observing pieces of works is an absolutely necessary process for understanding ceramics production. Seeing is believing. Even though you cannot acquire the techniques by observing works, you can learn something that you will bear in mind. I admire the works that our predecessors have achieved. However you try to create something unique to you, creating new and original styles is difficult for present-day creators because our forerunners have done that already. All you have to do is to learn classic works to interpret them in your own creation. Brand-new techniques have already run out and only the way left for us is to draw fully upon our predecessors' works for your creation.

- It seems that the works created by young Seto sometuke painters are widely different from classic sometsuke pieces. They don't seem to paint stylised patterns and motifs in detail any more but paint botanical motifs realistically.

New styles created now will be traditions of Seto sometsuke in the future. Young painters should try something unconventional by using their imagination. Having said that, however, I wish the traditional Seto sometsuke will survive in some way. I do wish there were one or two young craftspeople who would take over time-honoured pattern painting techniques of Seto sometsuke. 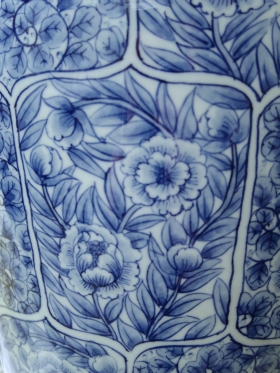 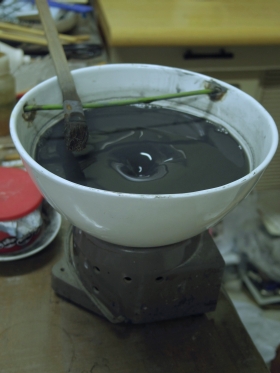 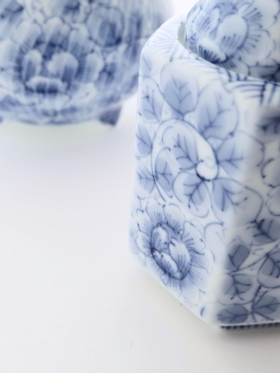